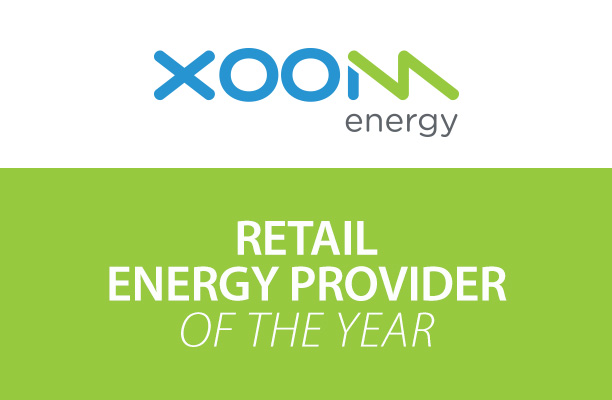 The following was released by XOOM Energy CHARLOTTE, NC – (March 31st, 2017) – The XOOM Energy family of energy retail companies, that provides natural gas and electricity services to homes and businesses across the U.S., Canada, and Japan has been recognized as the 2016 Retail Energy Provider of the Year. The award was presented by Energy Marketing Conferences, LLC at their 7th Semi-Annual Energy Marketing Conference in Houston, Texas on March 1st, 2017. As the leading event for the competitive energy industry, the EMC is proud to recognize XOOM Energy as the Retail Energy Provider of the Year based on their many accomplishments during 2016,” said Larry Leiken, EMC Co-Founder.

The year 2016 was another year full of achievements for XOOM Energy due to new markets and new products. It was the second year in a row XOOM Energy appeared on the Inc. 5000 list and was recognized as part of the 2016 North Carolina Mid-Market Fast 40 presented by the North Carolina Business Journal. It was also the third year in a row XOOM Energy was awarded the Grant Thornton North Carolina 100® award. Expansion has been key in XOOM Energy’s progressive and successful year, launching in seven new utility markets across the United States, in Maryland, New Jersey, and Pennsylvania, and launching for the first time internationally with a new entity in Alberta, Canada. Expansion continued when XOOM Energy, through XOOM Energy Japan, GK, became the first foreign energy retailer licensed to provide electricity to residents in Japan and began offering service to residential customers in Tokyo in December 2016.  “Expanding into two countries in one year took a lot of hard work and dedication from our team, and because of them, both launches were very successful,” stated Thomas Ulry, Chief Executive Officer. “We are excited to see what this year has in store for XOOM Energy,” he added. In addition to expansion internationally in 2016, the XOOM Energy family also introduced new innovative products through new relationships. These products included RescueLock, a fixed rate plan that donates 5% of the customer’s energy charges to PetSmart Charities®, the leading funder of animal welfare in North America, to help end pet homelessness, and FilterSnap which offers customers the opportunity to have their air filters delivered right to their door on an auto-fill basis. With the combined efforts of launching new markets, and creating new products, XOOM Energy has continued to build upon past success, striving to be at the forefront of the energy retail industry. “We are honored to have been recognized for our achievements by being named 2016 Retail Energy Provider of the Year,” expressed Ulry.   About XOOM Energy Based in Huntersville, North Carolina, XOOM Energy is a progressive family of independent energy retail companies that supply natural gas, electricity and renewable energy to residential, small business and large commercial customers in deregulated energy markets. XOOM Energy offers service through its wholly owned subsidiaries in 18 states, plus the District of Columbia, Alberta, and Ontario, Canada, in 90+ utility markets across North America. To find out more, visit xoomenergy.com. About the Energy Marketing Conference The mission of the Energy Marketing Conference is to provide the competitive energy industry with exciting conferences in premium locations – at very affordable prices.  The goal of the conference is to bring together hundreds of energy companies, utilities, marketers, vendors and suppliers in the competitive energy industry to network and learn more about our industry. We are the largest gathering of retail energy executives in the country – twice a year: Houston Texas in March and New York City in September.