Unlocked Devices Versus Universal Devices - There is a Difference 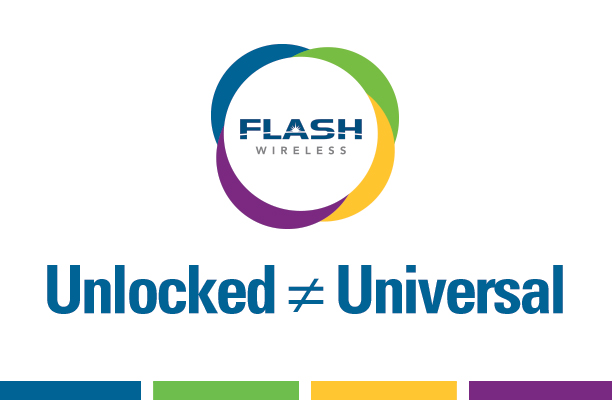 Understand the Difference. Educate Your Customers. Make the Most of Flash Wireless.

Hello ACN! My top priority is to make our customers’ experience with Flash Wireless second to none. And to help accomplish that goal, my team and I are committed to arming you, the IBOs, with everything you need to market Flash Wireless – and more importantly, everything you need to close the sale. Oftentimes, wireless users assume an unlocked phone is the same as a universal phone. This is a common misconception, and I’m here to clear it up for you as simply as possible. Bottom line: Unlocked does not equal universal. Understanding the difference will help you when talking to your potential customers about which device is right for them. So, let’s get started.

Unlocked phones are becoming an increasingly popular choice in the U.S. But what exactly is an unlocked smartphone? An unlocked phone is a phone that is NOT tied to a specific carrier or a contract – either a service contract or a device financing agreement – and therefore may work across different carrier networks. Additionally, unlocked phones don’t come preloaded with any carrier applications that take up space on your phone. However, unlocked DOES NOT MEAN you can take your phone to any wireless carrier you choose. Phone manufactures introduce specific models that are carrier specific. For example, Samsung produced the Samsung Galaxy S6 specifically for select wireless carriers. The model number on the phone will help identify the carrier the phone was manufactured for. While model number SM-G920P is exclusive to Sprint, model SM-G920T is exclusive to T-Mobile. So an unlocked Samsung Galaxy S6 with model number SM-G920P that is not under a service or device contract could be brought to Flash Wireless on the Sprint network. However, it could NOT be brought to the other two Flash Wireless networks because it was manufactured for the Sprint network.

3)    If the iPhone started on Sprint and it’s not one of the universal/multi-network models listed below, it’s best to only migrate those models to Flash Wireless Yellow.

Universal or Multi-Network phones are phones that work across all current data and voice networks for each Flash Wireless provider. A number of newer, unlocked phones such as the Moto G4 and the new Samsung Galaxy S7 (SM-G930U) are universal and therefore compatible with all major U.S. wireless carriers. For these devices, customers can choose any of the Flash Wireless networks with an applicable SIM Card. At Flash Wireless, we consider a device to be multi-network if it can work on each LTE network currently provided by Verizon, T-Mobile, and Sprint. Some older devices (e.g., the Apple iPhone 5s) will work for voice but lack newer LTE networks, and as a result, will deliver a subpar experience. Here’s the complete list of the 19 Universal or Multi-Network devices that have been manufactured. The devices in red are models currently available for sale at Flashwireless.com.

As always, if you or your customers have questions on a particular model, please check out the Flash Wireless FAQs or chat live with Customer Care, and they can assist in determining if your device is considered a universal device.

Here’s to the future of Flash Wireless and all that means for your personal business!